Starting on February 24, Christiana Little will be hosting the LIVE simulcasts of the Philadelphia Orchestra, broadcast live from Verizon Hall at the Kimmel Center into cinemas around the world. Christiana joins acclaimed concert film director Pierre Lamoureux in creating a magical evening for classical music lovers. She will have the honor of interviewing – live, on-camera – artists such as conductors Yannick Nezet-Seguin and Simon Rattle, violinist Hilary Hahn, soprano Barbara Hannigan, and pianist Jean-Yves Thibaudet.

The Philadelphia Orchestra LIVE from Verizon Hall, distributed by SpectiCast:

For more information on the complete series, and find a theatre near you, click here. 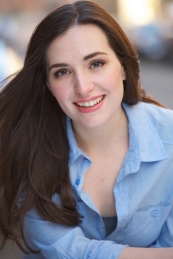 Christiana Little joins the cast of SMASHED: The Carrie Nation Story, which opens in April at the HERE Arts Center Dorothy B. Theatre, part of the Roadworks Series, presented by Opera on Tap. SMASHED is an original opera by James Berry and Timothy Braun, loosely based on the life of Carrie Nation, self-proclaimed “God’s bulldog” and ardent (if not downright violent) temperance movement activist. Christiana plays the role of Anne, a total lush.

Opera on Tap, which mixes high art and craft beers, has been called “raucous and sublime” by the NY Sun. Buy tickets here.

For more information and to buy tickets, visit the Opera on Tap Website.

Christiana Little, lyricist, has been invited to join the BMI Lehman Engel Musical Theatre Workshop. An innovative program at its inception, the BMI Lehman Engel Musical Theatre Workshop continues to flourish in its fiftieth year, and is considered to be the foremost training ground for new writing voices, nurturing shows like A Chorus Line, Little Shop of Horrors, Nine, Once On This Island, Ragtime, Avenue Q, Next To Normal, and The Book of Mormon.  The Workshop received a special Tony Award in 2007, and a Drama Desk Award in 2006. Christiana is honored to join this esteemed program.

Christiana Little sings at What He Did For Love, a Tribute to Martin Hamlisch, at DROM on Oct. 29

What He Did For Love, a tribute concert to the late, Tony-winning composer Marvin Hamlisch, will be presented at DROM in Manhattan Oct. 29, featuring Broadway and National Tour performers, including Alex Brightman (Wicked), Jennifer Noble (Ghost) and Christiana Little. The concert will feature songs from and stories about A Chorus Line, Smile!, The Goodybe Girl, They’re Playing Our Song, The Sweet Smell Of Success, The Champ, The Spy Who Loved Me, and more.

Created and produced by Andrey Lyle Patino, the evening will feature musical direction by Kristen Lee Rosenfeld. Jennifer Ashley Tepper (If It Only Runs a Minute) will host.

Doors will open at 7 PM.

Read about the concert on Playbill.com and BroadwayWorld.

Christiana Little joins comedy/improv news team of This Week in the World in their first-ever live show at the Looking Glass Theatre, on Wednesday August 22 at 8pm. Christiana plays the Voice of God, and also the nervous intern, Gladys Goodnight.

Christiana Little sings the work of Caleb Damschroder & Natalie Tenenbaum at the 45th Street Theatre on Thursday, August 2 at 9:30pm, part of a concert by the BMI Musical Theatre Workshop First Years. Christiana will be singing “Sunny Honeymoon” and accompanying herself on the ukulele. Tickets can be purchased here.

Tickets on sale for BOMBSHELL BABY! 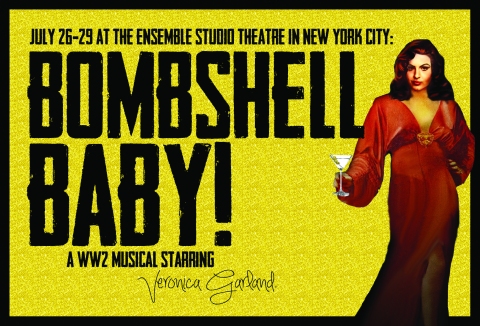 BOMBSHELL BABY! A WW2 Musical Starring Veronica Garland (book and lyrics by Christiana Little, music by Christiana Little and Rachel Felstein) will run July 26-29 at the Ensemble Studio Theatre in NYC. Tickets and more info about the show at www.bombshellbabymusical.com!

“1944: When the Super Secret Service has a trouble finding Hitler, they call on Veronica Garland, the most beautiful woman in the world, star of stage and screen, to come to the rescue.  Accompanied by a cross-dressing fighter pilot, a contraband candy dealer, and a French-Canadian cabaret dancer, Veronica belts and shimmies her way across Europe. Will she be derailed by an unexpected “bundle of joy”? Will she wheedle recon out of the One-Eyed Nazi? Will she ever find her MIA husband? And will that damn Hitler guy ever be de-bunkered? You have to come see BOMBSHELL BABY to find out!”

If you love new musical theatre works, drag queens (and kings), pithy social commentary, rousing music, dance numbers and/or scatalogical Nazi humor, then this show is for you.

Listen to Christiana Little sing “One of these things is not like the other” on this new PSA, part of the Texas General Land Office’s Adopt-A-Beach campaign:

Christiana Little cast in “Scheme of the Super Bullies”

Christiana Little has been cast as Countess von Cooties in the new musical Scheme of the Super Bullies, by Ross Wade, which will be presented Off-Broadway at the Marjorie S. Deane Little Theatre as part of the inaugural New York Children’s Theatre Festival, on Friday April 27, 2012 at 5:30pm and Saturday April 28 at 11am and 2pm.

Scheme of the Super Bullies is described as: “When mad scientist Countess von Cooties forms the League of Super Bullies, fiercely independent superhero Princess Dodgeball must learn to accept help from her friends (and the audience) to save her school, in this original musical.”

Buy tickets on the New York Children’s Theatre Festival website, or by calling 866-811-4111. $18 per person, $15 for YMCA members. All festival tickets are available through Ovationtix.

Click here to read a complete press release on the festival and the performances.

Watch an introduction to the show by writer and composer Ross Wade, and contribute to the show’s IndieGoGo campaign here.