…And something completely different!

Christiana sings “What I really want for Christmas,” by Bill Nelson (words) and Willem Oosthuysen (music), at the Musical Theatre Factory on December 18, 2014. Matthew Webb on piano.

Christiana Cole’s EP of sacred music, DIVINE MERCY, is now available. Guitarist Phil Faconti and Christiana met playing music at St. Francis di Paola Catholic Church in Williamsburg, Brooklyn. They decided to record some of their favorite songs and hymns, to preserve some of the magic that they created each week. Engineered, mixed and mastered by Jamie Cowperthwait (himself an accomplished composer and writer), DIVINE MERCY spans from 9th Century Latin Chant to Schubert to Quaker Hymns to contemporary praise and worship.

Christiana Cole in the December edition of Take A Ten Musicals: Warped

Christiana Cole plays the fierce space captain Jade in the December edition of TAKE A TEN, “Warped.” Also starring Aaron Phillips as an alien, Jackie Washam Cekovsky as a singing computer, and Chris Critelli as a furball doctor. Once a month, TAKE A TEN creates a brand new, ten-minute musical from scratch— writing it, performing it, and recording it. And it’s yours to sit back with and enjoy anytime for free! Christiana is very proud to make her TAKE A TEN debut. Take a listen below! Music by Andy Roninson, book by Chris Critelli, and lyrics by Chris Critelli and Andy Roninson.

TEETH, a new musical by Anna K. Jacobs (music) and Michael Jackson (book and lyrics), is being presented in a full reading at Ars Nova. Christiana Cole reprises her role as one of the Promise Keeper Girls. (Christiana was previously in a concert version of the show, as part of Ars Nova’s UNCHARTED program.)

TEETH is about an Evangelical Christian teen who discovers that she has teeth in her vagina.

Christiana Cole has the distinction of being in not one, but two 2014 NYC Fringe shows that have been extended into Encores. Of the over 200 shows in the Fringe, only 13 were selected to be part of this special “best of the fest” series, which runs at the SoHo Playhouse in September. Christiana will reprise her role as newbie mom Kate in Urban Momfare September 21 – September 28, and her role as a drunk opera singer in Smashed, on September 21. (Yes, she is doing two shows back to back on September 21st.)

Click here for tickets and more information about seeing Urban Momfare and Smashed at the SoHo Playhouse.

Read the playbill article about “Benjamin Button” by clicking here.

Christiana Cole cast in The Music Man with the Transport Group 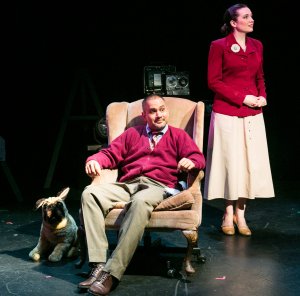 “‘Carousel of Progress” by Lauren Yee is the standout. It opens with a hilarious animatronic man (Rajesh Bose) from the attraction of that name at the 1964 fair; you can’t take your eyes off Mr. Bose, who in moments conjures the strange combination of wonder and clunkiness so integral to that time. But that’s just a sideshow. This delicate work is really about the space between the world’s fairs and two people (Christiana Little and Imran Sheikh) who in 1939 thought they had a future together, re-encounter each other in 1964 and briefly contemplate what might have been….The 16 actors, many in multiple roles, are top-notch.”

Christiana Cole in URBAN MOMFARE at the NYC Fringe

Christiana Cole heads up the cast of URBAN MOMFARE in the NYC Fringe Festival. The stiletto-tapping new musical (words and music by Pamela Weiler Grayson) follows the lives of three Upper East Side moms as they navigate the “cosmo jungle,” bringing up kids in the big city. Christiana plays newbie mom (and leading lady) Kate.

Christiana Cole premieres new plays by Wendy MacLeod and Lauren Yee as part of the World’s Fair Play Festival, at the Queens Theatre, July 18-27. The WFPL is a presentation of ten original ten-minute plays inspired by the 1939 and 1964 World’s Fairs.

The WFPF celebrates the rich, vibrant history that continues to animate Flushing Meadows Corona Park, the borough of Queens, and more broadly – New York City. The multiplicity of cultures and ideologies that were on display at the World’s Fairs and that populate Queens today will play an integral part in the WFPF.

Christiana is featured in “Drop a Dime” by Wendy MacLeod (The House of Yes, and premieres at the Goodman Theater and Playwrights Horizons) and “Carousel of Progress” by Lauren Yee (Ching Chong Chinaman, Pan Asian Rep: The Hatmaker’s Wife, Playwrights Realm). Lauren Keating and Erik Pearson direct, respectively.

The World’s Fair Play Festival at the Queens Theatre