“A Cozy Christmas with Christiana Cole” is available for download NOW.

A Cozy Christmas with Christiana Cole 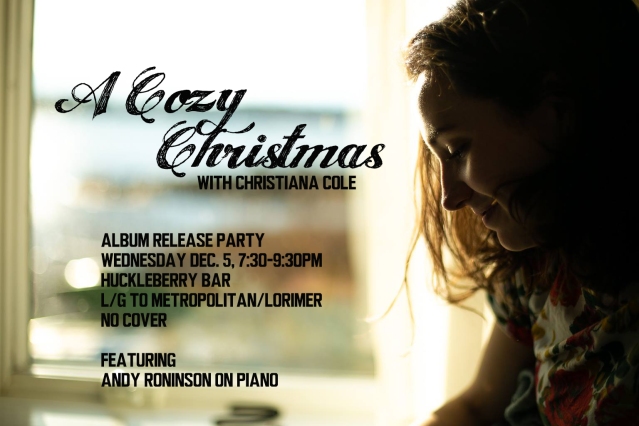 Come celebrate the season with friends, at the album release party for “A Cozy Christmas with Christiana Cole,” Christiana’s new album of eight sacred and secular Christmas favorites. Andy Roninson‘s world-class jazz piano playing is the perfect match to Christiana’s warm and velvety voice, with fresh piano arrangements on nearly every tune. With additional orchestrations by opera and musical theatre composer (and co-founding editor of Musical Theatre Today) Lucas Syed, and recorded at Williamsburg’s own Good Child Music with Bryan Smith, AND vocal cameos by Christiana’s husband, Aaron Phillips (Red Dead Redemption), this album is a welcome new addition to your holiday lineup. “A Cozy Christmas with Christiana” will be released across all major streaming platforms and on physical CD on December 5.

There’s no need to RSVP and there’s no cover. Just come celebrate with Christiana at this cozy cocktail bar and enjoy the art that she enjoyed making!

Christiana Cole rejoins the cast of The UnCivil Ones (formerly Mary Walker Wears What She Wants) in a special benefit performance honoring Emerging Artists Theatre.

The UnCivil Ones is by Christian Duhamel (book/lyrics/original concept), Ayumi Okada (music), and Charissa Bertels (additional book/original concept). “During the American Civil War, one of the nation’s first female surgeons, Doctor Mary Walker, defies gender norms and heads to the front lines to help the wounded. There she crosses paths with Jennie, a young woman posing as a male Confederate soldier, and Lizzie, a freed black slave acting as a Union spy. When Mary is captured by the Confederacy and imprisoned at Castle Thunder, she must rely on these women — each with very different ideas about freedom and womanhood — to help her survive.”

Christiana Cole will sing “Isn’t It Nice?” from The Average-Sized Mermaid by writing team Jessica Fleitman and Rick Bassett at NY City Center. This composition master class with Tom Kitt (Next to Normal, If/Then) is designed for emerging composers and lyricists, challenging them to tell new stories in musical theater.

Christiana Cole joins the cast of the new musical “Pecker,” with book by Owen Robertson and songs by Alan Cancelino. “Pecker” is based on the autobiographical film of same name by John Waters. The industry reading is directed by Jeff Calhoun (director of “Jekyll and Hyde,” “Newsies,” “Bonnie and Clyde” and “Grey Gardens” on Broadway), with Adam Wiggins as musical director.

Christiana Cole sings “Across a Crowded Room” at Lincoln Center

Christiana Cole joins as a starring performer of a new musical, “Descending,” by BJ Gandolfo and Rachael Migler.

The event is free. For more information and to reserve a ticket, click here.

Join us for a public masterclass with Kirsten Childs (bookwriter, composer and lyricist of Bella: An American Tale and The Bubbly Black Girl Sheds Her Chameleon Skin) and participants from Anna K. Jacobs’ (POP!; Harmony, Kansas; Teeth; Echo) Musical Songwriting Workshop. Over the week-long Musical Songwriting Workshop, participants have been guided through an authentic musical theater songwriting process and this masterclass will showcase what they have been working on. Christiana Cole will be one of the guest professionals performing the work written by the students in the class.

Kirsten Childs will talk about her creative and professional experiences as musical theater writers, then each team who have taken part in Anna K. Jacob’s Musical Songwriting Workshop will present their song and she will provide feedback and guidance.

Christiana Cole in readings of “The Lady Scribblers,” “The Book Thief” and “Mary Walker Wears What She Wants”

Christiana is having a very busy spring, with three readings on their plate over the next two weeks.

THE LADY SCRIBBLERS at the Drama League, Tuesday March 27 at 7:30pm. A reading of a new period comedy by Michaela Goldhaber, directed by Pat Diamond. Christiana plays Anne Bracegirdle, the premier comedienne of Restoration Comedy in London in the late 17th century.

THE BOOK THIEF (closed reading) on April 9th. THE BOOK THIEF is a new musical based on the best-selling book of the same name, by Elyssa Samsel & Kate Anderson (best known for writing “Olaf’s Frozen Adventure“) and produced by world-famous author Jodi Picoult. Christiana plays the roles of Barbara Steiner, Sister Maria, and Ilsa Hermann.

MARY WALKER WEARS WHAT SHE WANTS at The Mary Rodgers Room at The Dramatists Guild, April 13 at 8 pm. Book & Lyrics by Christian Duhamel (winner of the 2018 Kleban Prize) and Music by Ayumi Okada, with additional book and lyrics by Charissa Bertels. MARY WALKER is set in the Civil War, and explores our ideas of gender. Christiana plays Jennie, a person assigned female at birth (AFAB), who takes on a male identity (and the name Levi) in order to search for their brother on the battlefield. They choose to remain Levi even after the war is over. As a genderfluid performer, Christiana is thrilled to be playing a role that invites exploration of gender.

BMI favorite Christiana Cole will be one of the featured performers at the BMI Smoker on Thursday, March 8 at 5pm.

The BMI Lehman Engel Musical Theatre Workshop is widely regarded as the premiere training ground for emerging musical theatre composers, lyricists, and librettists. Since the inception of the workshop in 1961 a great number of works have been created by members and alumni, including: The Book of Mormon, Avenue Q, Ragtime, Nine, A Chorus Line, Grey Gardens, Next to Normal, and many more.

The Smoker is an annual event that features the most outstanding new songs presented in the Workshop that year.

Christiana Cole will be performing four roles in the Showcase —

The Smoker is FREE with RSVP to ssantana@bmi.com. 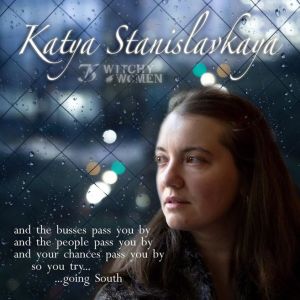 October 15: Christiana Cole will perform “I’m Just a Girl” from Going South, with words and music by Katya Stanislavskaya, at 7Songwriters: Witchy Women, a cabaret of musical theatre and art song written by women.

October 19: Christiana Cole will perform “Too Soon (to Say Goodbye)” and “Go, Go, Waterman” from The River Is Me, by Troy Anthony and Sukari Jones, at the Songwriter’s Showcase at the National Alliance for Musical Theatre (NAMT) Festival of New Musicals. The performance will be on Stage 3 of New World Stages at 2pm. Laura Brandel directs.

The River Is Me is a new original music theater ghost story inspired by all the lynched bodies of black boys that have been destroyed and discarded that we as a nation now must drink in time and time again from the very landscape beneath our feet. 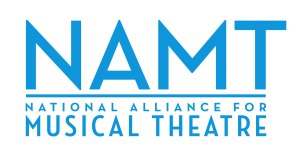 The National Alliance for Musical Theatre, founded in 1985, is a not-for-profit organization serving the musical theatre community. Our mission is to advance musical theatre by nurturing the creation, development, production and presentation of new and classic musicals, providing a forum for the sharing of resources and information relating to professional musical theatre through communication, networking and programming, and advocating for the imagination, diversity and joy unique to musical theatre. This year’s Festival features shows selected from over 240 submissions from around the world, representing the breadth, depth and excitement of musical theatre today.

For more information about attending NAMT, visit their website here. Most working NYC theatre professionals should be able to attend the concert for free.

Earlier this month, Christiana performed a concert version of a groundbreaking new musical, White Girl in Danger, with words and music by Michael R. Jackson, at Joe’s Pub on Sep. 24 at Adelphi University and Sep. 25 at Joe’s Pub, as Musical Theatre Factory’s season kickoff.

White Girl In Danger is a dark musical comedy about Keesha Gibbs, an African-American teen who lives in the “blackground” of an all white world of a 90s era melodrama and seeks to prove she’s just as much of a protagonist/heroine as Meagan, Maegan, and Megan, the white girls who battle issues such as drugs, alcohol, abusive boyfriends, eating disorders, and finally a serial killer who has been murdering the town’s white girls one by one. Inspired by classic 90s movies-of-the-week such as She Cried No, Friends ‘Til The End, and Mother, May I Sleep With Danger? The performance was directed by Tamilla Woodard with music direction by Darius Smith. The talented cast included LaToya Edwards, LaDonna Burns, Molly Hager, Christiana Cole, Bonnie Milligan, Liz Lark Brown, Eric William Morris, Sarita Lilly, Rheaume Crenshaw, and Larry Hamilton.