Christiana Cole is Big Alison in FUN HOME at TheatreSquared 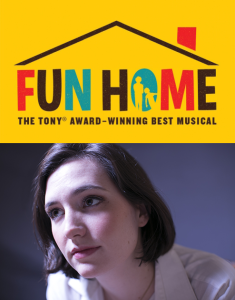 FUN HOME
Aug. 23 – Sept. 17, 2017
Book and lyrics by Lisa Kron; music by Jeanine Tesori
Based on the graphic novel by Alison Bechdel

A five-time Tony Award-winner and one of the most significant new musicals of the 21st century. When her father dies unexpectedly, graphic novelist Alison dives deep into her past to tell the story of the volatile, brilliant, one-of-a-kind man whose temperament and secrets defined her family and her life. Moving between past and present, Alison relives her unique childhood playing make-believe at the family business — the Bechdel Funeral Home. Fun Home is a refreshingly honest, cathartic, and wholly original musical about seeing your parents through grown-up eyes. Directed by Amy Herzberg; featuring Rita Harvey, Rob Sutton, and Christiana Cole.

“A rare beauty, extraordinary and heart-gripping. The best new musical to open on Broadway.” – The New York Times