On Monday August 31, 2015, Christiana Cole will compete at Tune in Time: New York’s Musical Theatre Game Show. In this “Musical Theater Olympics,” 3 teams of composers and lyricists who’ve never worked together are forced to collaborate – and to beat the clock. Their task? They must write a song from a new Broadway musical, the title of which is picked from a hatful of audience suggestions – in the style determined by a spin of the dreaded Genre Wheel. Can they write a TUNE IN TIME?

We won! Here’s a photo of Christiana and her writing partner for the night, Joe Kinosian (Murder for Two), Tune in Time host Emily McNamara, and their celebrity judges – a slew of Broadway Babies – Grace Matwijec, Eli Tokash, and Nicky Torchia. Also, check out this Broadway World article about our turn on the York Stage! 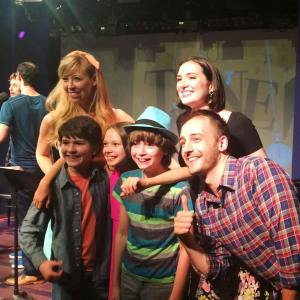